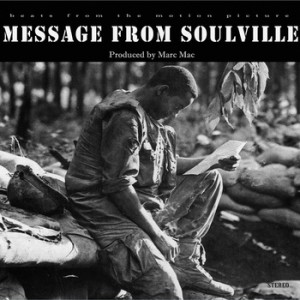 Message from Soulville – Available on Bandcamp

“Marc Mac (4hero) returns with another Mixtape Style album following on from ‘Extend The Knowledge” & “It’s Right To Be Civil”. Beats are intertwined with soundbites from the 1960’s Vietnam War protest era where African Americans were sent to fight in Vietnam during the Civil Rights period in the USA.

“The Vietnam War saw the highest proportion of blacks ever to serve in an American war. During the height of the U.S. involvement, 1965-69, blacks, who formed 11 percent of the American population, made up 12.6 percent of the soldiers in Vietnam. The majority of these were in the infantry, and although authorities differ on the figures, the percentage of black combat fatalities in that period was a staggering 14.9 percent, a proportion that subsequently declined. Volunteers and draftees included many frustrated blacks whose impatience with the war and the delays in racial progress in America led to race riots on a number of ships and military bases, beginning in 1968, and the services’ response in creating interracial councils and racial sensitivity training. . . . ” – John Sibley Butler, Remember To Remember. “A Generation Needs Truth”