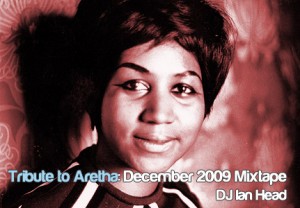 I thought I’d pay tribute to another one of my favorite artists, the queen of soul, Aretha Franklin. A voice like no other. I’ve done the Reborn Soul project (with Evolve-One) sampling her work, but I thought it was time to just play some of the records out that I really enjoyed. I didn’t get super obscure on here, kept it mostly within her Atlantic catalogue with a couple big hits and some minor ones.

I love the range of songs she did, from the raw, upbeat anthems to the smoother, Curtis Mayfield funk. There’s some great gospel stuff too that I didn’t include because it didn’t quite mix right, but maybe I’ll drop that on a later tape. But my favorite Aretha is her bluesy side – I think those songs are among my favorite, where he voice slowly builds and builds with emotion. The kind of songs you find yourself listening too after a long, frustrating day, that let you know someone else felt your anger, frustration, loss, or pain – and put it on record in the most raw, soulful way. Or rather, even if you don’t feel that way – she takes you right there herself, for a moment.

However, I tried to end the tape on a more upbeat note, with a classic live version of “Spirit in the Dark” with Ray Charles, off one of my favorite live albums, her “Live at the Fillmore West.”

This tape finishes up 2009, a pretty good but crazy year, that has found me traveling and then moving back across the country once more, resettling again in the boro of Brooklyn, NY. If I haven’t gotten at you recently, I promise to soon. Thanks to everyone who continues to listen to my tapes and tell others about them, it’s greatly appreciated.