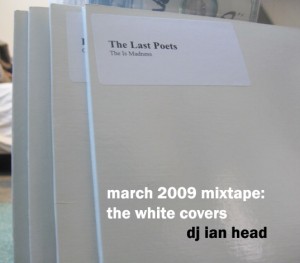 Sometimes, friends come by and glance through my record collection. They see the various stacks of white covers, with type-written labels attached on the upper-left hand corners. Are these all promos? a DJ asked me once. No, I told him, those are records that got hit in the flood. His eyes got real big and under his breath he said something like, Oh…shit.

Probably around 1,200 records and their covers were damaged when my basement flooded in late 2005. A contractor working on the plumbing next door had broke open a pipe and never fixed it, leaving water seeping into my basement for several hours. I came home from work to find my records, which leaned against corners of the wall, sat in crates on the floor or along the bottom shelf, soaking up various amounts of muddy water.

It is somewhat painful to even write about these events. If you love your record collection, then you understand: this is your worst nightmare. I proceeded to move all the wet records upstairs into the kitchen, and over the next few days remove each from its cover, dry it, and place it in a crate. Some of my favorite, as well as some very rare records, were caught in the flood. As I’d inch through the stack and see another classic cover, sopping wet – don’t ever think cardboard can’t soak up hella water – I’d stare at it in disbelief.

There is no room to dry over a thousand covers in a small Brooklyn apartment, especially in the rainy fall. I tried, though. Ultimately, they were thrown out in huge garbage bags. The records themselves – the music – was mostly ok. Many still have a little bit of mud that I was unable to wash out of their grooves. Mint-condition copies – sealed copies even – are no longer in that pristine state. And while I am grateful, and lucky, to still have the music, losing the covers is painful. Not only does it totally wipe away the financial value of a record, it wipes away much of its identity. The cover – the artwork, the typeface, the liner notes, the photography – for collectors, crate diggers and music lovers, this is part of the record. It may have been how we originally became curious about an album, the reason we reached for it in among others in the stack. To me, the cover is tied directly to the music, and when I pull a record off a shelf, just looking at its cover I can recall when and where I found it.

But records must have some kind of cover. So several weeks after the flood, I ordered what I could afford – two huge boxes of plain, shiny, white record covers, 300 covers inside each, plus a box of 500 sleeves. Not nearly enough for all my vinyl, but a start. When they arrived, I shoved them through the door and into the middle of my kitchen, and just kind of looked at them. Then I turned and looked at the piles of naked, sleeveless vinyl sitting in crates against the walls and literally circling my bed.

It all probably could have been totally cleaned up and re-organized in a couple weeks, but the emotional toll of the whole ordeal slowed the re-organization process way down. (Not to mention my lawsuit against the contractor, a whole other story). Over the course of a year, almost all the vinyl made it into brand new covers, along with labels on each.

The music does live on. It’s just inside glossy, somewhat stale-looking white covers now. Below are a few cuts from some of my favorite records whose covers have been lost, with a few notes on each. I tend to play a lot of songs out on this mix, but for you break heads, there’s a nice one at the very end.

Nancy Sinatra “Bang Bang”
Always thought Rza made some nice selections for the Kill Bill soundtrack, this was just such an ill cut, I had to have a copy of the vinyl. I found it at a garage sale about a year later for a buck. The cover on this is classic – Nancy in almost a b-girl pose against a white background, in between the album title. Perfect composition.

Bobbi Humphrey “Jasper County Man”
One of my favorite albums. I was put on by Digable Planets’ “Blowout Comb,” which sampled heavily from the album. I remember my dude Alex pulling a copy at Salvation Army for two dollars like he’d found a pot of gold. Another original cover, Bobbi smiling on the front in black and white, and the album title written in a thin font in the corner. It looks kind of low-budget and gritty.

Donny Hathaway “Valdez in the Country”
A classic.

Ballin Jack “Try to Relax”
Copped this in a dollar bin in Seattle. The whole band is on the cover, smiling.

Rufus Thomas “The Funky Bird”
“Keep digging, keep scratching…” The “Crown Prince of Dance” is standing on the cover, feet right in your face.

Funk, Inc. – “Message from the Meters”
Bought this at a flea market. You can’t miss the cover – the album is called “Superfunky,” in a big, 70s-style font. I’d been on the look out ever since DJ Center had checked a copy out from the county library (yes, the library) years ago.

Laura Lee – “Since I Fell for You”
I’m a big fan of Laura Lee, once I found one of her 45s a few years ago I was hooked. As usual, Laura is chillin on the cover, lookin right at you with some “Don’t even try it”-type look. Off the LP “Women’s Love Rights.”

Monk Higgins – “Feelin You Feelin Me”
One of the funkiest records out there. I check for anything Higgins produces, and am always after his solo joints. This was such a prized piece that I actually hung the warped and peeling cover on my kitchen wall for awhile. Still, the music lives on. Just a snip on the mixtape but the whole album is bass-heavy funk.

Sadat X – “The Interview”
My copy was signed by Sadat, though not to me. Bought it in a classic mom and pop spot on Girard Avenue in Philly. The cowboy theme was kind of hilarious but came off dope. And this track was a classic conceptually. Vintage 90s production with Sadat’s classic voice.

Ramp – “Daylight”
Crate heads know this one. The cover of this album is so ill – the neon-style font on “RAMP” and the floating “brain,” a kind of throwback hologram image, its bright colors contrasted against the black background. My copy was in near-mint condition. You can imagine how I felt when I realized this was among those soaked full of mud water.

Ahmad Jamal – “Death and Resurrection”
About half my Ahmad Jamal collection got caught up in the flood. This is one of my favorite Jamal records, all the cuts are very deep, with a lot of soulful strings perfectly placed and not over-dramatic.

JG – “????”
Can’t fully reveal this one. But I found it, sealed, at a flea market for two bucks. Beautiful record by a classic studio musician. It has the kind of feel that groups like 4hero and others seem to be emulating today, some real upbeat soul.