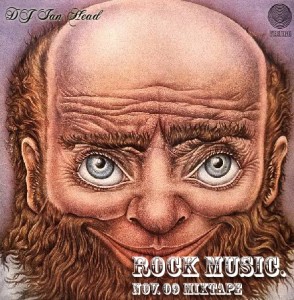 Honestly, calling something “rock” is pretty vague in itself – stereotypically the image associated with it is white, long-haired guys playing guitars over weak rhythm-sections, even though it came out of Black rhythm and blues. I’m not going to try and pretend I’m knowledgeable about the history of rock’n’roll, which is extremely complex and defined in many ways. Some people are going to take issue with some of these records and say they are “pop” and others are going to say that one or two might be “fusion.” The more I collect records and the more I make these tapes, the more I realize how different people have different definitions of musical categories.

That being said, I think many people would throw the records I’m playing on this mix into the “rock” category, in some fashion or another. Mostly there’s a lot of raw guitars, white guys singing in creepy / screaming voices, weird sounds, eerie keyboards and some fat, heavy drums and basslines. I tried to throw together a lot of styles – everything from some uptempo solo Stephen Stills to more obscure, like Argent and Atomic Rooster. And definitely, as always, kept a hip-hop element to the whole thing – a few classic samples and fat breaks.

What I dig about a lot of these records is the no-holds-barred sense that many of the bands had. They didn’t abide by the verse-chorus-verse-bridge kind of structure – they just went for it. Some songs are less than a minute, others stretch for 10. A hard rhythm gets replaced by a folky guitar. It can be jarring, but it can also be beautiful.

Basically a bunch of eclectic, good music. Hope you dig it.