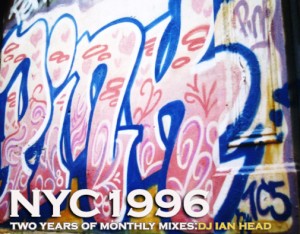 September makes two years of my monthly mixtape series, distributed free over the internets. To mark this little occasion, I thought I’d take it back to September 1996, when I first moved to New York City for college, and began seriously buying records – even though I didn’t own a turntable at the time. I’d hit the Fat Beats every few weeks, cop like two records, and then go back to school where they had this “music lab” where you could play shit. I’d bring a blank tape, and make little mixes of my slowly growing vinyl collection. Back then I still had a walkman, and I’d sit on the train playin my new soundtrack to my new city.

Even though DJ Shadow took a shot at the Puffy-inspired business comin outta NYC on his “Why Hip-Hop Sucks in ’96,” beneath the glamour and glitz, to me 1996 was a birthing period from some amazing new artists, as well as some slept on gems from established cats. Don’t get me wrong – the west coast was doin it’s thing as well, and so was the rest of the country. But for this tape, I want to concentrate on New York and my personal experience in beginning to buy vinyl.

Walking into Fat Beats and Bobbito’s Footwork was the first time I’d been in stores dedicated soley to hip-hop culture. Walls full of records. Big binders where you could buy dubs of Stretch and Bobbito shows and freestyles. I copped the first two Rob Swift mixtapes, and asked DJ Eclipse whether I should spend my five dollars on Mr. Complex’s 12inch or Jigmastas – I just wanted the dopest new DJ Spinna beat. All your purchases would have fresh stickers and promo cassettes tossed in your bag. You’d walk into Footwork and DJ Eli would be spinning some promo and Bobbito might be there drinkin a fruit smoothie. The photo of the Lady Pink piece above was taken after asking Bob where to check for dope graf spots.

All in all, it was a classic moment in time.

There are artists who didn’t make this tape that I love, so no disrespect. The selections are more a variety of album cuts and obscure 12inches that span the raw side of NYC-area hip-hop in ’96, and bring back various memories for me. I hope you enjoy.

De La Soul “Sweet Dreams”
This is off a rare EP that was especially hard to find in the 90s. As soon as we heard it was available, DJ Center and I rolled to Fat Beats to grab a copy, but were too late – a Japanese dealer had gotten there earlier, and he had a huge pile of wax set up on the counter, including the last six copies of the De La EP. I had to settle for a dub for years before finding a copy.

Sadat X ft. Money Boss Players “Game Sober”
One of my favorite joints off Sadat’s solo effort. People sleep on how ill this whole album was – lots of DITC production and ill rhymes. I had a dub of the tape but found a signed copy of the wax a few years later in Philadelphia.

Camp Lo Instrumental
One of my first records. Celph Titled (before he called himself that) used to send me homemade mixtapes in the mail, and at one point I hit him with some $$ to cop me two 12inches I couldn’t find out west – Camp Lo’s “Coolie High” and Smooth Da Hustler’s “Broken Language.” This is a b-side on that record that didn’t make the album.

Busta Rhymes “Live to Regret”
Another series of classic tapes from that era was DJ Premier’s Vol. 1-4. Primo definitely delivered some bangers and put me on to this joint, off the “Set it Off” soundtrack. Don’t sleep.

Poor Righteous Teachers “We Dat Nice”
I think I bought this the first or second time I was in Fat Beats. It just sounded so dope. Even though I messed up and copped the radio edit, I don’t regret it – PRT droppin lots of mathmatics as usual, but keep it real positive. This was an album cut I really dug off the release.

Redman ft. Method Man “Do What Ya Feel”
A often overlooked collab from these two – something darker than their usual upbeat party anthems.

Heather B “Recognize”
I don’t know what happened to Heather B, but I always thought she was a sick emcee. Her first album was HARD – I have a white label copy so I don’t know who was makin all the beats (Kenny Parker? Beatminerz?) but the shit hits, and Heather is hungry as hell. If you can find this, grab it.

Rza, Cappadonna & Method Man “Wu Wear”
A vintage Rza verse, rhymin shit like “monosodium glutimate” and “sodium benzoate.” I remember that video where Meth had the Tommy Hill-lookin shirt but it said “Johnny Blaze” instead.

Pop Da Brown Hornet “Black on Black Crime” with Greg Tate
A classic little 12inch from a Wu affiliate (Pop) with a piece of Greg Tate’s poetry, from another 12inch containing some spoken word selections. (Lots of nice vocal samples on that joint..)

Jay-Z “Friend or Foe”
Yeah, everyone knows this joint, but Jay’s record was important and with Jay not fuckin with Primo for years, I had to drop a brief reminder of how dope their were together.

Lace Da Booms “Cut That Weak Shit”
This is that underground NYC sound, the kind of thing you’d heard at 1am on WNYU, cats cutting up doubles.

Company Flow “8 Steps to Perfection”
There was this kid who went to school with me for like a year and a half, this emcee / producer named Kasm. He knew Company Flow and a bunch of other cats, and hit me with this tape of their shit, along with with unreleased early joints from Aesop Rock, J-Treds – all kinds of stuff. I heard the CoFlow shit and couldn’t believe it, copped their “Funcrusher” EP (clear vinyl) immediately.

Natural Resource “Bum Deal”
Probably one of my favorite 12 inches of all time. I may have put this on earlier mixtapes – I don’t really care though, I could put this on every mixtape. This group was sssooooo dope, so much flavor. Great flows, great loops, and…What What (now Jean Grae). The record doesn’t have a tracklisting on it, just the two labels – the silver and black “Negro League Baseball” and the red and black “They Lied.” This is the third song, which might be my favorite.

A-Butta & L-Swift “NYC”
I remember sitting in my dorm room, lights off (roommate asleep) with my boombox on my lap, record button pressed, listening to these classic freestyles and making sure my reception didnt fuck up. These two cats from Natural Elements always seemed to be up at WNYU just going and going for hours. (I posted one of those freestyles here). This was one of their releases, showcasing their classic intertwining flows.

DJ Spinna Instrumental
My high school janitor put me on to Spinna. He heard I was movin out to New York and was like, you gotta check for this cat DJ Spinna, his shit is bananas. Sure enough, there was an EP of Spinna’s beats labeled “Compositions Vol. 1” in the record bin, and I immediately grabbed it. We used to just vibe out to these beats all the time – it’s a compilation of remixes he’s done for other cats, but to me it’ll always be “Compositions.”

Siah and Yeshua Dapo Ed “The Visualz”
This always reminds me of a sunny day. Beautiful samples, laid back, fun rhymes. I think it just got re-released by my dude Noah, but for years it was vinyl-only. This was back when any record you bought on Bobbito’s Fondle Em label was certified classic. I distinctly remember grabbing this off the shelf. I have their sticker stuck to an old speaker somewhere.