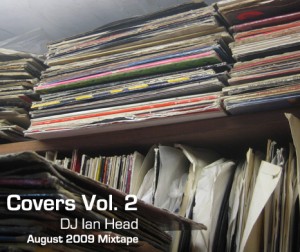 This is part two of my series of “Covers” mixtapes – the first was my December 2008 mixtape, available here. The liner notes for the first mixtape touch more deeply on my love of good cover songs, so I won’t repeat myself here.

On my side of the country, the heat is sweltering right now. And I imagine it might be like that everywhere come August – although with global warming, we can’t really predict anything anymore. But with hot temperatures in mind, I kept the groove slower and mostly chill on this tape. And n the spirit of Lou Donaldson, I tried to continue to play the funk.

The final three joints are my brief tribute to Michael Jackson – I stumbled upon two of the records recently and felt it would be good to put them all together for this mix. I know a lot of people are burnt out or feel a certain way about his passing being blown out of proportion, but to me Jackson was an amazing, multi-dimensional artist and icon, who gave us extremely positive music – and that’s something I think a lot of us are grabbing onto right now in these times of war, economic crisis and other craziness.

Lou Donaldson “Everything I Play Gohn Be Funky”
One of my favorite records. I dug it out for $10 – I think it was my first Blue Note record that had the jazz-funk sound rather than straight-ahead bebop. I couldn’t believe this cut, used to play it at college all the time, always put me in a good mood.

Michael Urbaniak “Free”
Bizarre rendition of the Denice Williams classic. The way he did the chorus is pretty sick tho.

“Mystic Maiden Voyage”
Can’t really reveal the band here. It’s even blacked out, DJ-style on the 12-inch. But another great cover of one of my favorite songs ever – this is the six minute edit, the full-length version is over nine minutes long.

Young Holt Limited “Look of Love”
More Bacharach. You can’t really do a “covers” mix without some flavor from Burt. I love the piano on here.

“Cubano Chant”
Another one of my favorite songs ever. Can’t reveal this one but it’s a great cover. Has anyone ever done a bad cover of “Cubano Chant” though?

Emotions “Aint No Sunshine”
This is a dollar record, and probably my favorite song on the album. Smooth, funky cover though – love the breakdown.

Jimmy Ponder “While My Guitar Gently Wheeps”
Had to play most of this cut. There’s a version somewhere with Ghostface just straight rhyming over the song (much like his classic “Holla”).

Grant Green “Ease Back”
I’m big on jazz covers of Meters / Allen Toussaint tunes (see Lou Donaldson above) because you just know the musicians are gonna go hard, and it’s gonna be some funkyass shit. The stuff you gotta blast on a sunny summer day.

Zulema “Where Your Are”
Part one in my MJ tribute, a great 45 I picked up awhile back that I rediscovered recently.

Davina “I Can’t Help It”
You can find this in the bargain bin if you look hard enough. Smooth 90s-style version of the classic. Shout out to DJ Center.

Cal Tjader “I Want You Back”
Grabbed this the other day at a small beach town in Washington. You’d think Tjader might slow it down or cheese it up, but it remains pretty funky and true to the original. Hope you enjoy.