Los Angeles DJ, producer and record head A-Ski just dropped his new album, “Change the Mood,” and I figured it was a good time to catch up with him and revitalize the Everdaybeats interview series. I hit him with a couple questions and got some deep answers.

IH: Talk about yourself for a moment. Where are you coming from with this new record?

A-SKI: Well, it was a natural progression. I have been producing and making beats since 87′. DJ’ing is my first love but I have been involved with music composition and playing instruments since I was 4. I learned how to play rhythm guitar & piano and drums when I  was  5 yrs old. As  the years went by, I felt the need for creative expression to be unleashed. As a DJ, I felt there was  a limit in creativity that I had already conquered. There was also a 5 year course of events that influenced many of the songs.. Love, passion & pain in harmony.

You’re a vinyl head and a music lover. What’s your take on the digital age?

As someone who has great admiration for warm analog, I also know  that both digital and analog has its pros and cons.  I strive towards bridging them  together. However, I feel the general listening audience is being cheated in terms of pure quality in sound;  in the same regard, digital technology has  allowed the masses accessiblility which was not there in previous years especially sound restoration of older catalog.

How often do you still go digging?

Nowadays, my time is  limited as  is  the space factor. The space is another conversation in itself. But I record hunt at least 2 or 3 times  a month vs  2 or 5 times a week  in my college days in the early 90″s..

The legend Donald Byrd just passed. If you were gonna tell a younger cat about his legacy, what records / songs would you start with?

Dr Byrd meant a lot to me due to the fact his music affected lives, family & musical structure. The first record or song I would start with would be the beautifully composes  “Cristo Redentor”, in that song there is  a strong darkness with a sense of hope with its haunting tones. The song embraces submission and serenity. The second would be “Change (Makes You Want to Hustle)”, a very street & festive record with the latin style horns & funky rhythm, urging the world & the streets  that its time for CHANGE!! That record was very special because during the time of that recording (1975) it represented an era of  self  awareness and empowerment . With all the technology & resources that is at their finger tips., self awareness is void and not promoted enough. Young people should be in touch with that kind of vibration to carry over. 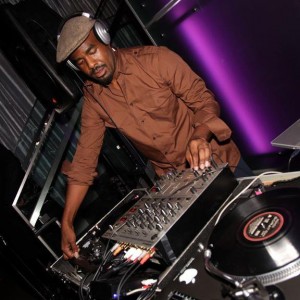 I’m always impressed by your knowledge of music – I feel like you should be teaching classes, if you don’t already. How do you school yourself on such a broad array of genres?

Thank You Sir, I am in the process  of  attaining a Ph.D in Ethnomusicology as we speak. Finishing my undergrad work that I started early (only a year and a half to go). My Grandmother was  a Piano/Music teacher and I feel as though her spirit lives  through me. My family has been involved with music forever. The love of knowledge and music has always been my driving force since I was a kid reading old CTI (Creed Taylor’s record label) liner notes.

Thanks for the time man! Where can we get the new release, and keep up with the gigs / everything else?

It has  been my pleasure! You can keep up with my latest projects , booking and blog at Unique74mag.com