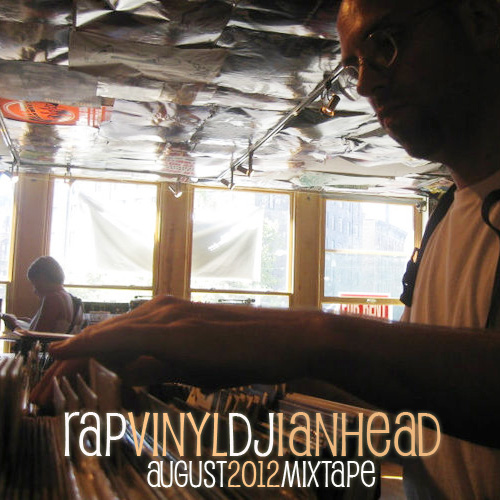 I love underground, independent hip-hop. I don’t think it gets its proper due. There’s just something about listening to talented, hungry emcees over unpolished beats that you don’t find in much mainstream music. There’s that certain aesthetic, the DIY hustle, that shines through the music. People keep telling me I’ll grow out of it, but it hasn’t happened yet.

In high school I spent a lot of time buying used tapes at one of Portland’s classic record stores, 2nd Avenue Records. Most of the store was vinyl, but they had this old wooden cabinet in the middle of the store and you could pull out these giant, heavy drawers full of cover-less, beat-up tapes for $2 each. I loved digging through those drawers, and sometimes I’d spend my lunch money on some new music. After grabbing a tape or two, I’d occasionally wander over to the hip-hop vinyl section and peak through. But it was a pointless mission since I didn’t have a record player.

However, I was a bit of a computer nerd, and I did have a 2400 baud modem attached to my dad’s PC. Around 1995, I found myself on a “BBS” (google it) message board emailing with a young emcee and producer in Florida who was accumulating heavy amounts of obscure, independent hip-hop vinyl. He volunteered to fill up any blank tape I sent him with the best hip-hop he had, and it was too good of a deal to pass up. I’d send him two tapes at a time, and get them back a month or two later, packed full of all kinds of independent hip-hop, b-sides and remixes. Stuff from all over the country. It was an education, and I can’t thank that dude enough for being so generous. He’s now a fairly well-known producer and emcee in New York, who has worked with many of the artists he dubbed onto those tapes. When I moved to New York in 96, I started hitting Fat Beats, Footwork, and other spots, not just for the latest wax, but also some of those classic joints from those mixes. Over the years I’ve tracked many of them down – but there’s still a few that elude me.

The first mixtape I made for internet distribution in 2007 was collection of 90s independent, underground hip-hop vinyl. Honestly, I don’t have a copy of that mix anymore – I’d looked on old hard drives, CDs, everywhere – I can’t find it. So I thought I’d take it back with a similar theme, and play an hour of independent hip-hop vinyl – it’s not strictly 90s releases, but most of these joints are at least 10 years old (I can’t believe it’s 2012…). A LOT of records got left off this tape – those that made the mix are some favorites and obscurities that hopefully not everyone has heard before. I tried not to play too many records that appear on my past tapes, and I also tried to span the country geographically.

So for the backpacker, underground heads like me that hear this, hopefully you enjoy.

Rhymefest “How We Chill Pt. 1” (CHICAGO)

It was hard not to put the b-side, “How We Chill Pt. 2,” featuring Juice, on here, but the original is basically just as dope. Ridiculous amount of Chicago references (even Upski) over a sick beat. One of my all-time favorite 12 inches, I remember finding it in the Discorama basement stacks on West 4th back in 97.

This was one of Stones Throw’s first releases – I remember for awhile I only associated Stones Throw with high quality 12 inches and some dude named Peanut Butter Wolf.

The Natural Resource singles are all-time favorites, but I thought this more obscure 12inch from Pumpkinhead was a classic posse cut over a dope Miles Davis loop.

I was big into the Legends in the late 90s. Elusive was a underrated producer – all his shit was like 80bpm max, just crazy soundscapes. I ordered from P-Minus who ran ATAK Distribution, the best place to mail-order underground west coast hip-hop. Unfortunate that Grouch and PSC have been now.

This was such a great record…man. Lif is such a beast! Flows + voice + politics + rawness.

Hard to figure out what Acey track to drop but figured I’d go with this one, something a little more out there but dope. Evidence of why these cats are pioneers and legends.

I bought this record off SOL emcee Wordsayer in 1995 at the first POH-HOP (Portland Oregon Hip-Hop Festival) after they had come down from Seattle to perform. I didn’t own a record player but was so impressed with their show I asked him if he had a tape and he said no, just this vinyl, so I copped it for five bucks. No regrets.

This was one of two singles they released from their album, which was also magnificent. Don’t sleep.

Another piece of dopeness from deep in the undergrounds.

I showed up one day at Fat Beats with six bucks. I wanted to get the freshest new DJ Spinna beats, with the dopest emcee(s). I pulled one Spinna-produced 12inch and this Mr. Complex 12inch off the wall and told DJ Eclipse, who was at the counter, which should I spend my six bucks on? He pushed the Mr. Complex towards me.

Some sick creative shit from VA.

These guys had these crazy lush beats, like hard drums with Rhodes samples – or possibly live keyboard playing, not sure which. Dope emcees too. Classic EP.

Munk with the Funk “Exersize” (PHILADELPHIA)

This is just straight 90s underground shit. I’m pretty sure I finally found this in basement crate at Cue Records in Philly. I love the radio edits.

Smut Peddlers “One by One” (Instrumental) (NYC)

I didn’t realize this existed on vinyl until it turned up in a bargain bin in LA. Super slept-on group that had several dope cuts.

T-Love’s first EP was great when it dropped, it was this breath of fresh air – the music, artwork, beats, guests. Just fun to listen to.

Really dig this record. My favorite part is the chorus, with DJ Spinna and Sean J Period singing. It just feels good.

Another classic EP – I always thought these cats were super under-rated. I don’t know if it was because they were from DC or what that they didn’t get as much exposure as they should. The Asheru and Blue Black LP is also essential listening.

Kind of symbolizes the Bobbito Fondle ‘Em Records era. I remember how much I loved to walk up 9th street and bug out in Footwork in the late 90s, digging through crates and checking for new t-shirts.

Some raw stuff from a part of Cali many people ignore.

I can’t stand Slug’s voice 90% of the time, and this EP is the only Atmosphere I own. But the other 10% he’ll just destroy shit. Really dug the back-and-forth vibe between the emcees on this one.

I remember watching this video late one night on Portland rap godfather Cool Nutz’s public access hip-hop show, and not believing how dope it was. One of my all-time favorite cuts, I own the promo blue-vinyl version and the regular version with the classic cover art.