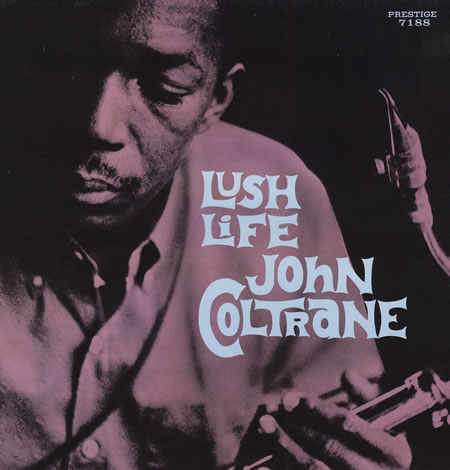 I love this cover photo of Trane in deep concentration. Is he taking a pause before starting another song? Is he reading some notes during a studio session? Is he going for a cigarette? The look on his face is serious but calm. Is it a “lush life” because he’s able to take these pauses between playing beautiful music?

I bought this record at a time when my collection was just beginning, where I could pull any record and tell someone exactly where I had obtained it, when I had gotten it, who might have been there with me. Possibly what I had paid even if there was no longer a tag glued to the cover. I remember cherishing this fact, because the search for records is such a large part of why I love them.

In the mid-to-late 90s, the East and West Village of Manhattan was flooded with record stores, almost all of which have evaporated since then. I had very little money to spend on vinyl, and so that made each journey and occasional purchase more memorable.

I believe I bought Coltrane’s “Lush Life” at SOUNDS on St. Marks Place in 1997, and paid $10 or $12 for it. Years after SOUNDS closed, you could be sure to find their former stock at various places in the city, with their emblematic sticker pasted onto the front of a record, sometimes with a mouth-watering price – $1.99 for that rare Strata East record?! Back then there were at least 3-4 record stores on St. Marks at any given time, but now I’m uncertain if any of them still exist.

It is a beautiful recording. This was my only Coltrane on vinyl for many years. He has much more adventurous recordings, more experimental and brilliant moments, but this is still one of my all-time favorites for its sense of calm confidence and soft tranquility, as exemplified by the cover.