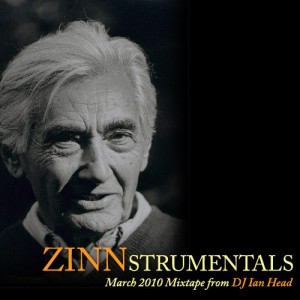 Just as many of us djs and producers look up to those who work and look outside the box, I believe in looking outside the so-called box when thinking about history, politics and society in general. So did legendary historian and author Howard Zinn, who sadly passed just a little over a month ago. His book “Peoples History of the United States” was his attempt to tell history from voices and viewpoints often shut out of history text books. I found it inspiring, as well as his belief that “neutrality” was basically bullshit; that if you are silent, you are siding with the status quo. In his words, “you can’t be neutral on a moving train.”

So this tape is a bit of an experiment – originally I was going to just do an instrumental tape of some my favorite beats, especially records often forgotten or overlooked. But I felt it needed something more, and so I dropped in some tidbits from various interviews with Zinn, who I believe was often overlooked himself. For someone whose book has sold well over a million copies worldwide, and who has been a commentator, activist and author for several decades, his passing drew very little attention in the media. Columnist Bob Herbert summed it up best, writing “His death this week at the age of 87 was a loss that should have drawn much more attention from a press corps that spends an inordinate amount of its time obsessing idiotically over the likes of Tiger Woods and John Edwards.”

The records I pulled for this mix come from a variety of producers, and I tried to keep it obscure but dope, lots of underground 12inches that I feel are often forgotten. I’ve included a tracklisting of the producers below, in order.

The excerpts of / about Howard Zinn are from Democracy Now! with Amy Goodman, Bill Moyers Journal on PBS, and Prison Radio with Mumia Abu-Jamal.