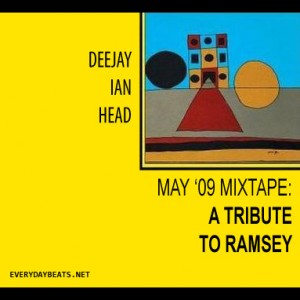 May 2009 Mixtape: A Tribute to Ramsey
DJ Ian Head

Personally, I don’t think Ramsey gets the love he deserves among the beat heads and collectors. It’s true his records aren’t sampled as heavily as other artists, and that he was very successful, so his titles aren’t that rare. But the dude is ridiculously talented, versatile and funky. He kept his rhythm section tight, and his production value high – while there might not be a lot of open drums, the kicks and snares are definitely hitting hard, often in a really raw, ill way, especially on the records he put out on the Cadet label. His LPs are full of heat, whether it’s the big singles or album cuts.

The first Ramsey record I picked up, and really one of the first records I ever dug out of a crate, was “Maiden Voyage.” I knew that there was a break on there that Pharcyde used, and another little something sampled by Black Sheep. But I couldn’t help listening to the entire record, especially songs like “Maiden Voyage” and “Les Fleur” that had a crazy, mystical vibe to them. I’d never really heard music like that before, and I’m not sure if I have heard anything like it since. Jazz and soul and classical and some other things flowing all together.

Which is what’s great about Ramsey Lewis. His catalogue is gigantic – this mix mainly focuses on about ten of my favorite albums, put out on the Cadet and Columbia labels, but is not to say his other work is less impressive. Even on just these records he branches styles from symphonic, funk, soul and straight-ahead jazz. He’s recorded and performed with orchestras, but has also said he just loves making people dance with his music. It’s not that he tries to “do everything,” it’s just that it seems like he has endless creativity in how he approaches his records.

Ramsey did a huge amount of cover songs – some records being almost entirely covers of other songs, from the Beatles to Aretha Franklin to movie scores. This is often a bad sign with other jazz artists – usually it means a record filled with half-assed, cheesy covers that the label forced them to record in hopes of the extra buck. But Ramsey’s covers are funky, often raw – he’s hitting the keys hard, and with a bass groove and solid drums backing him up. Nothing overdone.

So here’s a brief selection of some of my favorites. I tried not to include anything that I had already used on a previous mix – Ramsey is in my top ten favorite artists of all time, and you can count on me dropping his joints on many other mixes down the line.

“Intro / Black Bird”
Ramsey was getting almost psychedelic with it, especially the way he started a lot of tunes, and especially on this record, Mother Nature’s Son. It was like, psych-jazz versions of Beatles songs. A lot of that was also the influence of Charles Stepney, this album’s arranger.

“Mighty Quinn”
The song that put me onto Ramsey. Pharcyde sampled that break for an interlude. Little did I know that there was much more to Ramsey that a short breakbeat.

“Hot Dawgitt” w/Interview Pt. 1
This is off the classic “Sun Goddess” record, the title track is a classic, but most of the record is fire. Don’t know whether to categorize it as jazz or funk or something else.

“Brazilica”
The second Ramsey record I copped, a warped copy of “Salongo” that I knew had to be ill because on the back cover his man was wearing these sunglasses with that had three parts – we used to call them “Third Eye” sunglasses. Some crazy 70s shit. The record is crazy, Afrofunk-rhythms and Latin vibes, plus fusion.

“Back to the Roots”
Title track off another dope record, more straight-ahead stuff, but just nice and upbeat.

“Kufanya Mapenzi (Making Love)”
When I found this 45, I thought it was some exclusive shit. It’s just so crazy sounding!! The organ, the breakdowns, the hihats…sick. Sometimes I drop this at parties.

“Wandering Rose”
Check how he flips styles and rhythm on this cut, relaxes the vibe and then pushes it forward, then brings it back, opens it up again. And the drums are so raw.

“Collage” w/Interview Pt. 2
My dude Alex was probably right there with me digging up Ramsey early on. He put me on to a couple records that I was missing back in the day too. So when I told him I was doing the tape, he was like, “You gotta put Collage on there.” That bassline is crazy.

“My Love for You”
Slow, but check how deep this cut is. Original composition from his percussionist / violinist, Ed Green.

“Whenever, Wherever”
Another Charles Stepney piece, kind of abstract but really ill. Love the use of voices at the beginning, and the way the tempo switches.

“Goin Hollywood”
Cool joint off one of his soundtrack LPs.

“Respect”
Had to put one of his soul covers on here, and why not Aretha? Used to bump this in my college dorm room. I love the feel of the joint when it’s just bass, drums and piano. It could have been cheese, but it’s not.

“Love for a Day”
Some might think this is a little too cheese-fusiony, but I think there’s a sick groove to this, especially the way Ramsey is playing. This is a dope record, lots of ill basslines on here – “Solar Wind.”

“Cry Baby Cry”
Another cover, but so soulful! Plus cool moog sounds.

“Les Fleur”
Had to end with this. Minnie Riperton + Ramsey Lewis = Classic.