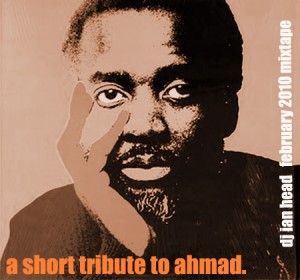 I write these liner notes with a sigh. First of all, let me say Ahmad Jamal is one of my favorite pianists of all time, and I love many of his records immensely. The albums “Jamal Plays Jamal” and “The Awakening” are pieces of art that should be in every music lover’s collection. His covers of standards and classics are often beautiful and creative, and his touch on the keys always sounds incredible.

This is a short mix of eight songs I really dig, nothing close to a sampling of his catalog. In making the mix, I thought I’d try and spice things up a little and maybe drop in a nice sample of Jamal speaking once or twice, so I searched the internets for a nice little snippet. I did find a nice interview from 1985 on Marian McPartland’s “Piano Jazz” show (everyone needs to tune in to this if they haven’t already) but it didn’t quite fit.

And then I found a more recent 20 minute interview on a WNYC show, and after getting halfway through, had to turn it off. While the interviewer left much to be desired, so did Jamal. Even after being told that hip-hop had helped many people find his music, he had nothing to say except mumble about not getting paid for samples.

The man is a legend, and if he’s gotten jacked by record labels, I totally sympathize. But it was Pete Rock and Common Sense and Nas that led me to “I Love Music,” which ends this mixtape. I remember finding “The Awakening” for five bucks from some dude on Prince Street back in ’97 and clutching it tightly under my arm. And so it is always somewhat of a let down to hear people I look up to kind of brush aside the very reason I know who they are.

But what can you do? This is probably true of many of the artists I love. The bottom line is, these are great records and beautiful music. Jamal is a phenomenal musician, and I had to the privilege of witnessing him live at the Blue Note a couple years ago and it was stunning. The way he not only played the keys but directed and created the environment around him was magical.

Again, this is just a short selection, of the post-Argo Jamal. And despite my frustration with his outlook on hip-hop, everyone who hasn’t dug into his catalog should make it a priority.

Children of the Night
One
Handicapper
Manhattan Reflections
Eclipse
You’re Welcome, Stop on By
Theme from M.A.S.H.
I Love Music