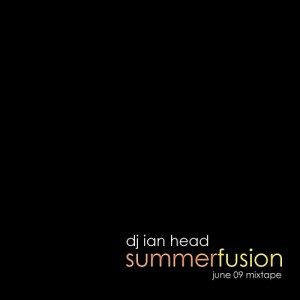 There’s the back cover of a Ramsey Lewis record that kinda symbolizes fusion for me. It’s one of the first records I ever dug up. It has the whole crew of musicians, chillin, rockin various funky styles of clothing. One dude though – he’s rockin these sunglasses with an extra lense in the middle – a lense, possibly, for the metaphysical “Third Eye.” It’s that kinda vibe – mystical, funky, political, and just plain out there – that’s some fusion ish. In that spirit, I play Roy Ayer’s “The Third Eye” on this mix.

Honestly, I’m not really sure what “fusion” is. There’s jazz fusion, rock fusion, disco fusion – obviously, we’re talkin bout the fusing of different sounds, styles, genres, ideas, etc. But did it start in 1977 or 1982? Did certain artists pointedly try making fusion music, or did it just come out sounding that way? Maybe some musical scholar can school me in all this, but to me fusion is just that certain fuzzy, funky, borderline cheesy sound that it seems artists from all genres tried out at one time or another, usually in the late 70s and early 80s. Sometimes it worked – a lot of the time, it really didn’t. Or at least, for me it doesn’t – but some of it might have been the hottest ish out in 1979. I just wouldn’t know, I was only one year old.

One thing fusion has blessed hiphop with though is some FUNKY ASS SAMPLES. There’s some deep, deep grooves in some of these records. Basslines, choruses of voices, hard drums, funky Rhodes pianos. The key is finding these grooves, and the problem is avoiding the points where the sappy saxophone or harsh guitar suddenly make you think of a bad love scene in an 80s Chuck Norris film. Other times, however, the groove might ride out like a sunny day cruisin with the windows down, some west coast type chillin.

I tried to put together a mix of both short breaks and longer selections. I’m not sure if all of this qualifies as “fusion” technically speaking, but to me it has that abstract, funky quality that you don’t find earlier in the 70s, when shit seemed more raw-sounding, or later in the 80s, when it got all Jimmy-Jamm’d out with electro drums and basslines (don’t take that as a dis, I’m just describin sounds here – I love me some Rhythm Nation).

These aren’t the rarest of records, but on this one, I can’t really reveal the selections. These are some obscure-ish, funky samples – and yeah, they’re samples. Like, I might sample them. Or others already did. So just vibe out. It’s mostly jazz-related musicians, and many who recorded on Blue Note, which put out a lot of great fusion-ish records in the 70s.