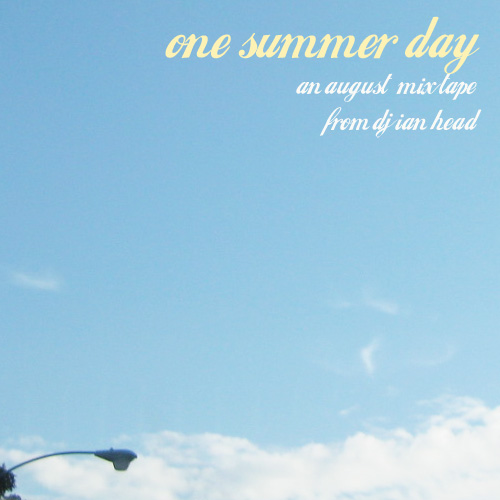 I ate an incredible nectarine today while walking back home in the sun, after spending a couple hours catching up with a good friend. It was one of those mid-summer mornings where it’s important to get out of the house, but not to do it in a rush. I got an extra hour of sleep, and drank a cup of fresh coffee, reminisced with another friend from college, then laced up the sneakers and rolled out the house.

Maybe I should call this tape “one summer morning,” except the afternoon of putting it together plays into it as well. Kind of a contemplative little piece, something I hadn’t planned on doing – there was a stack of records mostly ready to go for a different tape completely, but when I tried to mix them this afternoon it didn’t feel right.

So, I pulled a new stack and started from scratch.

It’s just a few tunes, more selection than mixing, and hopefully the vibe comes through. I appreciate that I am able to take a moment and chill for a second, take in some sun, eat some good food, kick it with some good people. And bump a few records.

NOTE: RIP Eugene McDaniels. Orignally I knew about him because of the legendary beat-digger album, “Headless Heroes of the Apocalypse,” but soon realized how significant he was to music in general, composing many tracks for Roberta Flack, and writing the songs “Compared to What” and “Feel Like Making Love,” among others. He had a crazy, unique voice, creative production styles and dropped a lot of politics in his later songs. His first big hit, the anti-Vietnam “Compared to What” as played by Les McCann and Eddie Harris in 1969, finishes off this tape. If you don’t know about him, look him up.