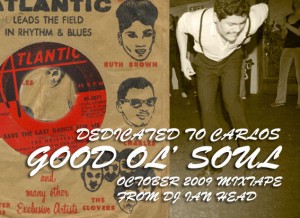 I’ve spent a number of years accumulating a lot of soul 45s, not just rare stuff but the big hits, the “golden oldies,” that my dad used to play in the car when I was a kid. Just because the records were huge doesn’t mean they aren’t great music, even though I feel that they are frowned upon by many DJs today, either because of their popular status or because the sound is simply “too old” to play now. I can see there being reasons for not playing a Sam and Dave record unless it’s a wedding – a lot of young people are gonna be like, what the hell is this? The thing is, this soul music, whether on Motown or Atlantic or another large label, was (and is) extremely danceable, just a different kind of danceable than what’s in the club today.

Anyway, I’ll keep it simple – I love these songs, just like I love some of the heavier, rare-groove type stuff as well. Whether or not it’s “cool” to play it. And that brings me to my friend Carlos.

My relationship with Carlos had little to do with music. He was a volunteer at a program I ran, helping to send legal information to prisoners (http://jailhouselaw.org). He was an extremely dedicated volunteer, and often it’d just be me and him and a stack of 120 letters from prisoners to answer, staying into the night to get through them. I’d often play one of my mixtapes as background music. At one point, Carlos offered up his iPod to plug in and play, and we started listening to his catalog of 50s and 60s blues and soul music. Lots of Ray Charles, Otis Redding, King Curtis. He started bringing flyers for dance parties he was djing – spinning strictly 50s and 60s 45s, he told me. We’d occasionally talk music – I remember vibing with him about Rufus Thomas’s “Turn Your Damper Down” one day, how he loved that song and wanted to find more Rufus 45s. But he wasn’t a hip-hop, “breaks” type of head – I remember the Ray Charles song Kanye sampled for “Gold Digger” came on his iPod once, and another volunteer said “Isn’t this what Kanye sampled?” And Carlos hadn’t even heard the Kanye song, he was just like, “Really?”

Carlos was not only a music lover and DJ, but an incredible dancer. Such an incredible dancer that he was known throughout Brooklyn – when he stepped on the floor, people took notice. He’d warm a spot up djing, then let another person take over and go out on the floor. This was how he died last August – dancing to the music he loved, he collapsed. He was 29.

As much as I wanted to, I never made it out to his parties. I’d always be doing something else, or be too tired. It’s one of the few things I regret, not being able to see him in action on the dancefloor, vibing to the great music he loved. And so I thought I’d dedicate this mixtape to him. It is not supposed to be “what he would play” but it could maybe be what I might have played, if I had ever dj’d with him. I realize there’s not a lot of 50s songs on here, mostly just 60s stuff, some a little more break-oriented (Alvin Cash) and some big hits (Aretha). The final song is Archie Bell and the Drells “Tighten Up” which I know was one of his favorites of all time. It’s an amazing song – the breakdown is one of the best that I know of, as Bell directs each of his musicians to solo and come in over each other.

Carlos was straight-edge, a vegan, who once spent a year cooking all his meals and not eating out. He cared deeply about the struggles of prisoners in the U.S., and dedicated countless unpaid hours to helping send thousands of legal handbooks to people imprisoned all over the country. He had a quirky sense of humor, and was constantly asking questions, showing up with new books to talk about every other week. He would smile broadly whenever one of his favorite songs was playing. He had incredible soul.

This is for my friend Carlos Alvarez.

You can read an article about Carlos Alvarez in the NY Press by clicking here.

The Miracles – “I Like It Like That”
Soul Brothers Six – “Some Kinda Wonderful”
Bobby Marchan – “Shake Your Tambourine”
Edwin Starr – “25 Miles”
Roger Collins – “She’s Lookin Good”
Shirley Ellis – “The Clapping Song”
Alvin Cash – “Keep on Dancing”
Gladys Knight & the Pips – “End of Our Road”
Toussaint McCall – “Shimmy”
Rufus Thomas – “Turn Your Damper Down”
Otis and Carla – “Tramp”
Dyke and the Blazers – “Let a Man Be a Man, Let a Woman Be a Woman”
Aretha Franklin – “Respect”
Sam and Dave – “Hold on I’m Comin”
Arthur Alexander – “A Shot of Rhythm and Blues”
Archie Bell – “Tighten Up”