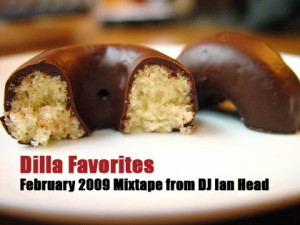 Let me be up front – I know a tape based around Jay Dee (Dilla)’s music is cliché at this point. J. Rocc of the Beat Junkies has already done several definitive mixes, Rev. Shinez has dug deep into original Dilla breaks, and Houseshoes just put out what may be the most complete mix of the samples Jay Dee used.

So I understand if you pass up my tape.

But hopefully you won’t. I really dug Dilla, his choice of records, his lush filtered samples, his basslines, and the fact he loved to eat donuts (Cuz I LOVE me some donuts). I was introduced to his genius by Jumbo of the Lifesavas, otherwise known as my high school janitor. He hit me with a dub of the early Slum Village album before it dropped, and told me to dub it and give it back to him the next day, cuz that was his only copy. And even rocking a dub of a dub, the beats were just so ill. I’d bump the shit til I couldn’t take the rhmyes anymore, but I never got tired of the beats.

I’d wanted to do this tape for awhile, and felt I should put something together dedicated to Dilla, as I was a fan of his music. Not every beat or 12 inch, but the feel of his production – he just had a great ear for great records. This tape is a mixture of some of my favorite Dilla-related records (that I own on wax) from well-known to more obscure, from rock to classic hip-hop tracks. It is by no means any kind of compendium, and isn’t meant to be. It’s just a brief sampling of music I dig, music that represents the inspiration I took from Jay Dee.

I’ll run through a few of the tracks I included on the tape:

“When I Die”
This was sampled for one of my favorite joints off of “Donuts.” The more you listen to Donuts and the samples he used creating it, the more you see how carefully he planned it as his last record. It’s sad yet beautiful. Anyway, I just loved what he did with this, but I also thought it’s a great little song in itself.

“Long Red” by Mountain
Everyone knows this classic breakbeat. I remember copping a few copies in the dollabin years ago. As my dude Alex says, Dilla made these drums part of his signature sound. No one used these drums like Dilla except for Rick Rubin. They are so hard, so raw, and plus you got the singer’s “Louder!” that just peaks the energy level even more.

“Let’s Ride” by Q-Tip
Hard drums (crazy programming), sick guitar sample, and Tip killing it. It’s one of my favorite Tip songs ever. The feel of the joint is so ill, and so much of it is the combination of the snap of those drums and the light feel of the guitar.

“We Must Be in Love”
I don’t know when or where I got this 45 but I was going through my collection before I moved and put this on the deck, and was like, oh shit. A great song already, Dilla takes it, transforms it into his own soul record (with the help of Monch).

“Inside My Love” by Minnie Riperton
Another classic of the “Dilla sound.” He must have used this record a dozen times – I hear this sample (even though I first heard it on Tribe’s “Lyrics to Go”) and I immediately think Dilla.

“Track” by J. Dilla
I remember buying this 12 inch and playing it literally 10 times straight when I got home. Mostly just the instrumental (sorry Phat Kat). That bassline is just so ridiculous. I love how he keeps that kind of white noise-record sound play throughout as well. Genius.

“Love Junkie (remix)” DJ Cam / Cameo ft. Dilla
Fuckin CAMEO and Dilla goin back and forth?? “You can’t fight the feelin / Cam and Dilla Dog / enough to have me illin’”

“Asiko” by Tony Allen
If you don’t have Tony Allen’s “Black Voices,” make that your next purchase. Fela’s drummer as a master, and this is one of my favorite albums of any genre. The fact that Dilla sampled this just puts a bigger smile on my face.

“Fuck the Police” by Jay Dee
This is definitely an original I’m still after. Regardless, I love that Dilla made a raw, political track like this. A classic.

“Get a Hold” by Tribe Called Quest
I remember fronting on a lot of “Beats, Rhymes and Life” when it came out, but I couldn’t deny this cut. This was kind of a prelude to the style he flipped on “Players.” Classic verses from Tip just take it to that other level.

“You’re Gonna Want Me Back” by Dionne Warwick
Had to have this record once I heard the original. Just a great song. This album actually has a couple joints with Dionne getting funky. But just the way Holland / Dozier structured the song is sick, similar to how Dilla re-structured the cut on “Donuts.”

“Nag Champa” by Common
Instantly my favorite off the album when I heard it. “Word to my mother like my last record cover.” Common’s flow is so perfect with the subtle Ummah beat…that bass? That fusion sample? Crazy.