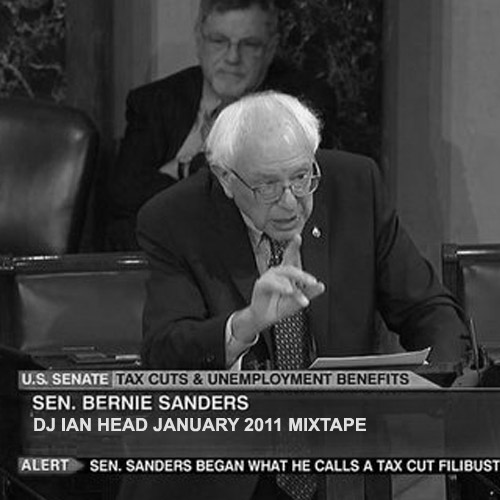 On December 10, 2010, Senator Bernie Sanders of Vermont, an Independent, took a full day to go hard against the so-called “Middle Class Tax Relief Act of 2010” tax bill, which continues the massive George Bush-era tax breaks for rich people for two more years (and possibly/probably more). I’m not usually one to dedicate a tape to a politician of any stripe, but I have to give it up to someone standing up against basically everyone in Washington – Democrats and Republicans – and railing against them for eight and a half hours straight, fact after blatant fact, about how they are selling out working people, the poor and the middle class. So, credit is due, and as Bernie was bringing his speech to a close, I posted on Facebook that I’d dedicate the next Monthly Mixtape to him, so here it is.

If you want to read an article about the bill, here’s one (of several) by progressive economist Dean Baker: http://www.huffingtonpost.com/dean-baker/the-tax-deal-and-the-apoc_b_795989.html.

This is a short tape, just over 20 minutes, and the music was selected for thematic feeling rather than anything symbolic. Hopefully it worked. I remember ten years ago when I lived in Philly talking with another activist, hip-hop head friend of mine about doing a series of “political mixtapes” that touched on themes / people and mixed music and vocal snippets, but it never came together. I’m not sure if this is exactly what we envisioned but I like doing it every once in awhile (the last similar tape was the Howard Zinn dedication).

Snippets were taken off Youtube, Democracy Now! and MSNBC’s Countdown. Shout out to Bernie Sanders, the only socialist in Congress.