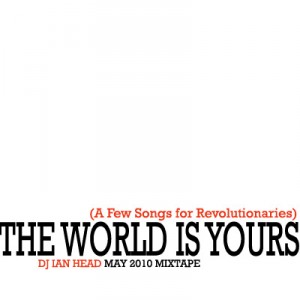 I wanted to do a politically-themed mixtape for May, and the idea was cemented when Arizona passed a horrific law legalizing racial profiling – among other things – a few weeks ago. I also wanted to try and include more obscure cuts, and branch out beyond just hip-hop. And – include more voices from women. I’m not sure if I totally achieved any of these goals, but hopefully it’s an enjoyable tape. As a final note, I wanted to make sure the voice of Guru of Gangstarr, who passed last month, was included on the tape.

After it was done, I asked emcee, vocalist, conspirator and friend Not4Prophet from X-Vandals / Ricanstruction to write up some “guest” liner notes. Here are his notes, which include the songs on the tape as well as several more important cuts listed below.

“The music, any art you create is about your life; it’s a reflection of your life. And so the history of black people in this country which is tied absolutely historically to Africa, and to the greatness of Africa, to the fall of Africa, to the slave trade, to slavery, all those thing. All those things are incorporated in your psyche and in your music and in your art” – Amiri Baraka

“our music has dominated this culture and the courage and unstoppable qualities of this indefinable, indescribable beat now begins a new to dominate politics, business and all that we endeavor to do. For we know that we are the beaters of drums and other things to which we can impart raw soul. We are the beaters, but we will never be beaten” – jim Ingram

BLACK music (those sonic, seditious sounds derived from us who is African ascendants) has always been nada less than political resistance music. Didn’t (and still don’t) matter what the lyrics were talkin’ bout (or even if it had/has any words at all) whether it be about revolution or simply the art of moving theMasses, the (not so simple) act of re-creating music, art, culture, struggle, life, coming from a people who were (mostly) brought overs the water in chains on their feet, hands (but not brains or souls, which is often the same thing) or, as Khalid Muhammad put it, “robbed of our name, robbed of our language, We lost our religion, our culture, our god…” is straight up to the most high as revolutionary as it ( their God)damn well gets!

Yeah, this “white mans” world was once ours back when we was proud to be black is black and saying it loud and long before there was even a need for an(other) Haitian fight song and before you could buy A.F.R.I.C.A for the price of a song and dance and well before we was re-called into amerikkka, but, but, but wait, cuz now big brothers got armed guards blocking the borders to keep the brown hoards from the 3d and 4th wards or more from getting even a small piece of that devils pie in the sky, and meanwhile they’ve declared (another) war or more against us (again) from Albany to Alabama to Arizona and back again and again and some of we (the) people who are darker than blue keep on saying we don’t want war no more and further more, we don’t need no more trouble and that things is now better compared to what we knew and you still keep on keeping on and on and up and continue to walk tall in spite of all these walls and rise and falls still bragging and sagging sabotage in fitted blasting caps and doo rag dynamite dipped in kero-scene mean machines with an ancient hache y machete maid in manhattan racking for respect and modern day Malcolm X molotavs in hand to hand and hand in hand and all in all while our souls is still on lockdown uptown some where between here and there and soledad the south bronx or some ones slum or the cemetery and now ya girls got a gun and your native sons still on the run like a public enemy number won suns tryna fight the power wit nuttin’ but a what’s goin’ on rebel song gone wrong and a less than rich mans robin hood theory on how to get free without MTV and the may 4th movement seems like a long time ago or maybe just yesterday and the revolution has been in effect and the beat (or the bombs) about to drop or maybe just rot or perhaps not…. yet!

These tone poem songs or time bomb prayer tracks on wax compiled here in are just a little bite and a tiny bit of the sanctified soul food feast that the sons and dawters of alkebulan have forever and ever, amen, blessed us with through the many and few years since way back in the daze of slavery and before (and after). Re-joice, riot and re-wind… until the fire next time!

Other song titles that not4prophet added to the liner notes: